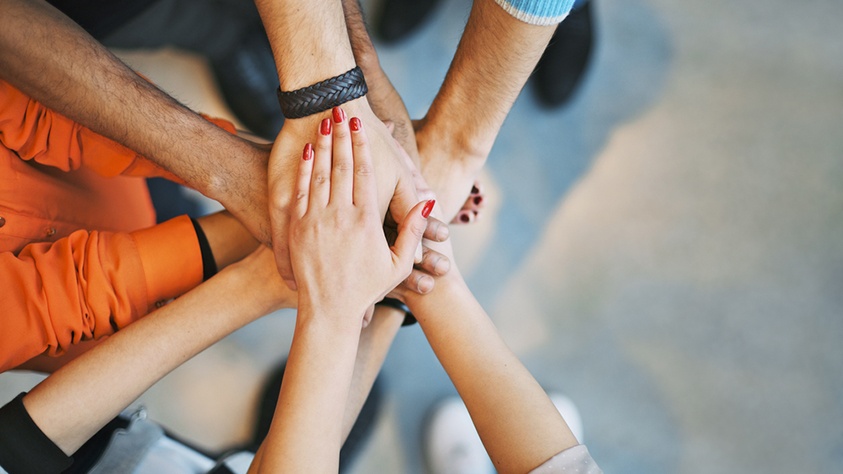 Why the International Day of Friendship on 30 July is also important for companies is obvious - at least to social scientists. Scientific opinion argues that friendships generally develop as a result of regular contact and having things in common, such as the same education, similar interests, values and goals. This makes the workplace fertile ground for friendships. And, from the porter's office to the executive floor, no one is exempt. "A business is a social system in which people are friendly or unfriendly", explains industrial psychologist Arthur Drexler in the career blog 'hafawo.at'. "It is normal for friendships to develop there - you go for a drink with one another, go sailing or invite people round for a meal".

A survey among almost 12,000 workers in 14 countries by the career network LinkedIn clearly demonstrates the significant effect that friendships at work have on motivation, a good working environment and whether people enjoy their work. Almost half of those surveyed said that friendships between colleagues increase satisfaction with everyday work. 18 percent indicated that it has a positive effect on their performance at work - not least because friends can encourage each other to improve their performance by way of healthy competition. "Colleagues who like each other are supportive and loyal to one another. An instruction from a friend is more followed more readily than an order from a less popular superior. This then makes the work easier", says Drexler.

With risks and side effects

Nevertheless, many companies remain sceptical about over-friendly relationships between employees. Not without reason: a friendship demands loyalty and support that may be abused, or resented by others. An argument between colleagues who are friends may result in both opponents obstructing the work of the other. If other colleagues get wind of it, possibly taking sides, then harmonious and efficient workflows are a thing of the past. Conversely, close friendships can give outsiders the feeling of being disadvantaged. Particularly when it involves friendships between people on different managerial levels. In this case, the friends must agree on clear rules and a professional relationship during working hours.

Despite the difficulties, it is worth companies encouraging a friendly atmosphere between employees. A recent survey regarding motivation at work by the ManpowerGroup has shown a good relationship with colleagues and superiors to be the greatest motivator. 77 percent of those surveyed said that they enjoyed their job more because of this. For 45 percent it is also important to get on well with colleagues outside of work. A Gallup survey came to similar conclusions: 56 percent of people surveyed who had a close friendship with someone at work considered themselves to be highly motivated in their job. Conversely, 63 percent of employees who do not have colleagues as friends said they only did the minimum of what was required. And there are other surveys that confirm: colleagues who get on well, and support each other, are significantly more effective in their work then those who just concentrate on the job.

Companies can encourage this by creating opportunities for exchanging ideas away from the desk and flip chart – for example through company sports groups, a pleasant canteen, a regular team breakfast not connected with work, by socialising with colleagues in the evening or by planning other external activities. But no one should be forced to take part. Everyone should accept that there are still employees who prefer to maintain a strict distinction between their work and private life. In terms of maintaining personal friendships within the company, managers need to be able to tread a fine line. On the one hand, for the purposes of creating a good working atmosphere they should not sound aloof; on the other hand, they should never appear to give preferential treatment to employees with whom they are friends.

An Eye-Catching Employer Brand: Corporate design in job adverts
Recruitment 2017: Trends and Developments
7 Secrets to Retaining Your Talent in 2017
The Changing Face of HR: Change management in personnel
The best Christmas present: A good rest!
3 tips for better collaboration in recruitment